Far away from power mania and knee dragging, we offer exclusive motorcycles in old and new metal. We're dedicated to traditional values, inspired by the pulse of former times and living this dream in the center of Berlin. 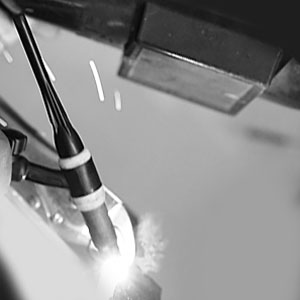 Far away from power mania and knee dragging, we offer exclusive motorcycles in old and new metal. We're dedicated to traditional values, inspired by the pulse of former times and living this dream in the center of Berlin. Traditional craftsmanship and puristic aesthetics are our main focus.

A good workshop only needs a few essentials ... with our guru Henry definitely fulfilling his share! He's our MacGyver – with magical hands, experience, peace, and style. He has returned to Urban Motor to finally find his screwed-up soul some piece. Let's do it, Henry!

He's young and wants know-how! Viktor wouldn't allow us to get rid of his desire for filthy, sore and burned fingers. Well, he got his wish, Henry and Ufo have turned him into a keen two-wheel mechanic and future bike builder.

Yes, it's a UFO! When our man Uwe sneaks around the corner, he could almost be mistaken for the supernatural. He remains calm even when there's oil dripping from every crevice. The guy has even slept in rooms packed with Guzzi's, so if anyone knows a Guzzi, it's him. Now you know.

Peter is our world citizen. He acts as a merchant, an ideas factory, and a visionary for the workshop. He leaves the screwing to the professionals, playing a more autonomous role with his keyboard in the marketing department. He keeps things flowing for Urban Motor and the crew.

The history behind it all

So how did it all start? Pleasantries and unpleasantries to say the least. Unpleasentness from what we were doing at that time, but the desire to do something that would quench our thirst. I can say for myself personally, after having worked in marketing for the music industry, I developed a certain aversion over the years. By the end, the bell had well and truly rung.

I sold my share in the agency, became a father and took care of my child for a year and though about what I could do. For me, there were really only two roads: my passion for sport and my passion for motorcycles that I'd had since my youth. What had worked successfully in the entertainment area I wanted to transfer to the motorcycle world. Since I had that existing passion for exotic and special motorcycles and had met two people who both also dared to do something new – both being two-wheel mechanics – I thought this would be a great team. We developed a concept over a year and Urban Motor was born.

So what was our reasoning? Honestly, to have fun – as naive as that sounds for three guys who were almost all 40 to say they just want to have fun. But that really was the main goal. We all knew that we would have to make serious sacrifices. In the lead up, we naturally scanned the market and knew our project was extremely risky. Many people told us we (literally) had a screw loose when we said we wanted to take predominantly old Europeans – i.e. BMW two-valve Boxers – and make them beautiful. Most didn't believe it. The absolute no-go was to focus solely on making money.

The absolute no‑go was to focus solely on making money

People thought we were completely insane, but you know what? If there were three of us already who loved this type of thing, then there certainly could be more out there too. Now we believe that we really showed those naysayers who was crazy.

Why Boxers? One of the greatest features of Urban Motor is our passion for BMW two-valve Boxers. At the time nobody was rebuilding these, at least not professionally. Our practices embody a reduced and simplified style. Not completely in an opposite direction, but more in the sense of change. Tweaking a design is always possible, however you must ensure clarity and consistency.

We also appreciate the two-valve cartridges because they are simple and practical. Thgey have a basic technology and are absolutely suitable for everyday use no matter their age.

The history of Urban Motor includes, of course, our first five babies: The WR, McQueen, Black Pearl, Earl Grey and Scoro. They sit firmly in our Hall of Fame and granted us features in many magazines that became the basis for our success. We've since rolled many others from the workbench now, but we will forever hold these guys in our hearts!

Every morning we get up, prepare for obligatory oily hands, and get on the phone. We have a lot of fun with it. Thanks to all who share our passion, you are the backbone of our success.

A story of grandeur, gasoline, tears and featured beauties